The University of Sadat City (USC) has joined QS Quacquarelli Symonds for its first time since founded and has achieved;

QS Quacquarelli Symonds is the world’s leading provider of services, analytics, and insight to the global higher education sector, whose mission is to enable motivated people anywhere in the world to fulfil their potential through educational achievement, international mobility, and career development.

QS is an annual ranking of universities around the world and is published by the British company Quacquarelli Symonds inaugurated in 2004, has grown to become the world’s most popular source of comparative data about university performance. Originally, its rankings were published by The Times of Higher Education publications from 2004 to 2009 under the name “The Times Higher Education World University Rankings and Quacquarelli Symonds”. QS issues an annual report in which more than 30,000 universities around the world are ranked according to academic and scientific criteria.

The Times Higher Education World University Rankings are the only global performance tables that judge research-intensive universities across all their core missions: teaching, research, knowledge transfer and international outlook. We use 13 carefully calibrated performance indicators to provide the most comprehensive and balanced comparisons, trusted by students, academics, university leaders, industry and governments.

What makes this classification distinguished is that it deals with accurate indicators that reflect the university’s ability, analyzes the components of universities, assesses the level of education provided by the classified universities, the quality of its basic and applied research, and describes the capabilities of its alumni, in addition to its international position.

Most international universities have praised the accuracy of this classification, which has become a measure that universities follow to develop their performance and reach greater reputation.

Compare University of Sadat City’s Ranking to The Egyptian Universities 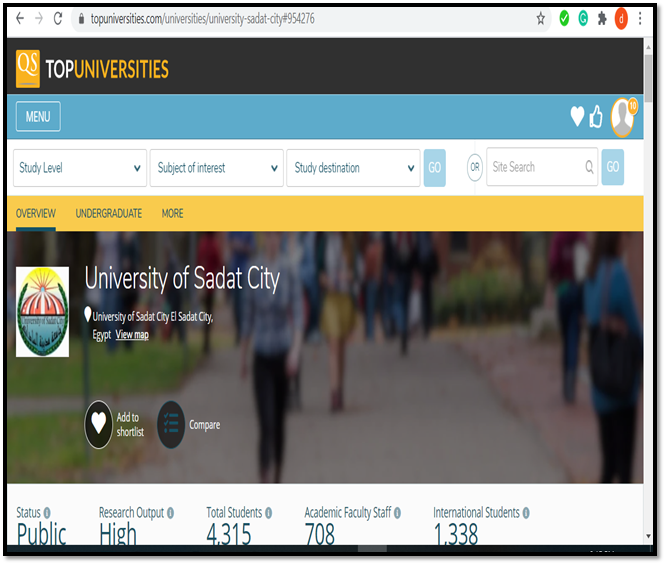